Grace Lutheran Church was formed in 2007 as the result of the consolidation of three small congregations: Emanuel, Holy Triune and St. Paul’s. The congregations were within a 2-mile radius of one another and had been a part of Northeast Minneapolis for over 100 years. Northeast has a long history of being a first landing place for immigrants and is known for its numerous churches.

Swedish, Norwegian and German immigrants formed the founding congregations. Each church had a strong community connection and was a gathering place for worship and socializing. The church memberships peaked during the 1950s through the 1970s. Like many urban congregations, the churches experienced loss of membership during the 1980s and 90s. As founding families moved away and the neighborhood became more diverse, memberships dwindled. However, each church had an enthusiastic core group that felt committed to the area. The congregations spent months in fact-finding and town-hall-style meetings to develop a shared vision that they hoped would make the new church a vital, engaged presence in the community.

Each of the founding congregations had a beautiful, but old church building. The buildings all had long lists of expensive repair issues relating to deferred maintenance, handicapped accessibility and HVAC systems. As painful as it was to say good-bye to beloved buildings, the congregation made the difficult choice to pool resources and consolidate into one building. With facility issues behind them, they hoped to concentrate on living out their new mission and becoming a more vibrant part of the community.

Soon after the consolidation, the congregation sold one building, and had another rented to a congregation that was working on getting financing to purchase it. Grace Lutheran used the remaining building as its main site in 2008 and started to work on a master plan to upgrade it.

While considering the remodeling project, major structural issues were discovered in the sanctuary of the remaining building. Cost estimates to make repairs greatly exceeded the capital the church had hoped to use in a renovation. The architectural firm that discovered the structural issues believed they dated back to when the Gothic Revival church was built in 1899. The steeple towers and high ceiling had held together for years, but the architect advised against ignoring it.

The collapse of the 35W bridge from years earlier weighed on the minds of the members as they contemplated what to do. They decided they couldn’t take a chance on remaining in a building they had been warned of as being structurally deficient. The congregation decided to look for a new building. In the interim, the congregation arranged to share sanctuary space with the congregation that was renting and working on financing the purchase of other building they still owned.

Grace Lutheran turned its attention to the possibility of purchasing the nearby Holland Elementary school, a 1968 area building. The Minneapolis School district had closed it in 2005 due to citywide enrollment and budget concerns. It had stood vacant for years and had recently been put on the market. The building was a good match for the church in terms of being a multi-use facility with flexible space for programming. It was handicap accessible, had ample parking and a two-story light-filled atrium in the center of the building that would work well as worship space.

In December of 2008, the church submitted a proposal to the school district to purchase the old school building. This started an 18-month-long series of conversations and actions that eventually resulted in the purchase of the school. Grace Lutheran moved into its current location in June of 2010.

The Connection Between Grace Center and Grace Lutheran

As a new and relatively small church, Grace Lutheran recognized that it did not have the capacity to own and manage a 52,000 square foot building on its own. The congregation got creative. They invited the partnership of the Minneapolis Area Synod of the ELCA to form a new nonprofit corporation, called Northeast Lutheran Ministry Center (NELMC), an organization with the sole purpose of owning and managing the facility, which is now named Grace Center.

Grace Lutheran’s vision for Grace Center was to be a place that served the needs of people and organization in lower Northeast Minneapolis that were currently going unmet. It’s mission was to focus on three primary areas: Faith, Learning and Service. The facility would provide shared worship space for different church communities, house a charter school, a food shelf and act as a community resource. It’s gym and multi-purpose room would provide low-cost meeting space for a variety of community groups, events and fundraisers.

After three years that were largely consumed with facility issues – first with a structurally damaged building, then pursuing a new building – the congregation is now focused on its mission:  “To create a welcoming faith community called to love God, serve our neighbors, and tell the story of Jesus Christ.” 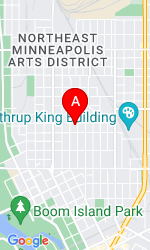